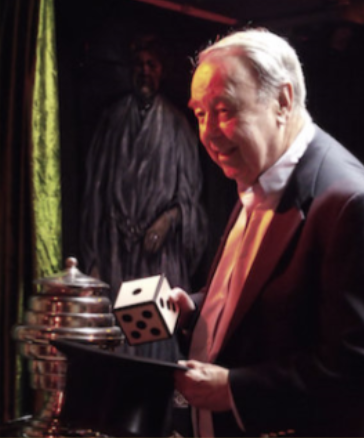 Ken Klosterman, as the patriarch of the Klosterman Baking Company, built the largest privately held baking company in the Midwest. One of his major customers is McDonalds. Using one of the most automated bakeries in the world, his bakery can produce over 1500 buns a minute, six days a week. The seventh day is scheduled to allow the equipment to be maintained. Ken was one of the first people to private label bread for customers and consistently grew his business over the year. Retiring from active Involvement in 1990, the business is now run by his son, Chip, who continued the high standards set forth by his father.

As his business flourished and took him on travels around the country, he found he needed a new area of relaxation and diversion from the daily grind of business. While on a trip to Chicago in the 1970’s, he happened upon a Magic Collectors meeting. This was a gathering of magic historians and collector’s that enjoyed the history, posters, and apparatus from the golden age of magic. The die was cast for the start of one of the largest and most historical collections of magic in the world.

Meeting a gentleman, who had procured many of the remnants of the Circus Museum of Sarasota, he began to learn more about the important apparatus and ephemera from days long ag0. The Circus Museum was a failed attempt by John Ringling North to house the most important magic collections of the premier magic collectors of the day. Men like Dr. Samuel Hooker, Charles Larson, Thomas Chew Worthington III and John McManus mean very little to average person. But they had assembled some of the most important historical pieces of magic in the world. They tried to insure that their collections would endure beyond their years but it was not to be.

Enter Ken Klosterman. Starting with a nucleus of the 1200 items from the Circus Museum, he has continually added and upgraded the collection so that is now encompasses over 4500 pieces of apparatus, 36,000 pieces of ephemera which includes letters, photos, program and scrapbooks, 150 complete bound sets of different magic periodicals, over 1500 posters including many stone lithographed posters and a library of over 10,000 books.

Located in Loveland, Ohio, the major portion collection is housed beneath this home in an abandoned mine 83 feet 6 inches beneath the surface in a temperature controlled environment on his large thoroughbred horse farm. Thoroughbred horses were his wife’s, Judy’s hobby and Ken has kept the farm going; still hoping for that big Kentucky Derby winner.

The collection houses items from the early superstars of magic. Names like Alexander Herrmann, Harry Kellar, Karl Germain, Howard Thurston, Harry Blackstone and many others mean very little to people today unless they are associated with magic. Non-magicians recognize names like Houdini, Copperfield and maybe Penn and Teller, but beyond that other names mean little to them. Beyond that they can appreciate the craftsmanship that was used to produce many of these unique pieces of magical apparatus. Old world craftsmanship that is simply not found today. Yes, there are also artifacts of Houdini, Copperfield and Penn and Teller in the collection.

“What is Ken’s favorite item?” Well, that is like asking which child you love the best. Every item has it own appeal and story behind it. Ken can tell you where it was acquired and the provenance to the item. Provenance is very important to Ken as he traced the documentation that authenticates who actually owned and used these props. 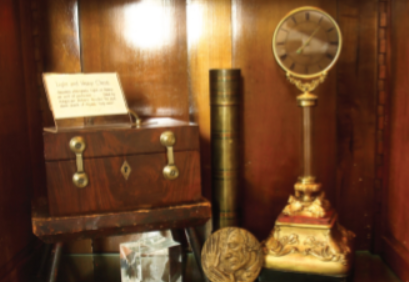 One of the more important props in the collection is Robert Houdin’s Light and Heavy Chest. In magic, this is like the “holy grail”. Louis Napoleon and the French Government called Robert Houdin out of retirement in 1857 to help put down a rebellion in the French colony of Algeria. Using this box to sap the strength from strong warriors so they were unable to lift it up the box but a child could, he convinced the chieftains that France and his magic was stronger than theirs. He literally stopped a war with this small box.

Ken’s collection has been featured in the Smithsonian Magazine and on numerous television shows including “Mysteries at the Museum” and “World’s Greatest Magic”. In the World’s Greatest Magic show, Robert Ulrich and Ken recreated the “Light Heavy Chest” for a modern audience proving that great magic endures the test of time.

As the collection grew, it simply outgrew the mine storage area. Portions of the collection are now housed at his Georgetown home called Whitehall. Georgetown, Ohio was the boyhood home of General U.S. Grant. At this location, there is a restored 1842 antebellum mansion and a four-story stone gristmill. The house contains many of the more important items in the collection as well as one of the premier collections of crooked gambling devices. The gristmill has many of the larger illusions in magic set up for viewing.

Ken has carefully cataloged and researched every item in the collection. Within a fully searchable database, every detail of each item has been recorded and made accessible with a click of computer keyboard. The entire database will eventually be located in the cloud so it can be used and enjoyed by people for years to come. In this way, Ken hopes to perpetuate the information and knowledge that he has worked to assemble over the past fifty plus years.


Disclaimer: This database has been constructed to make information as accurate as possible. Due to the nature of these collectables, we understand there may be differing opinions on various items. Should you find something you feel is not correct, please forward the appropriate documentation and we will consider adding or correcting the information. This database will only be as good as the sum of it’s users. Your input is welcome.